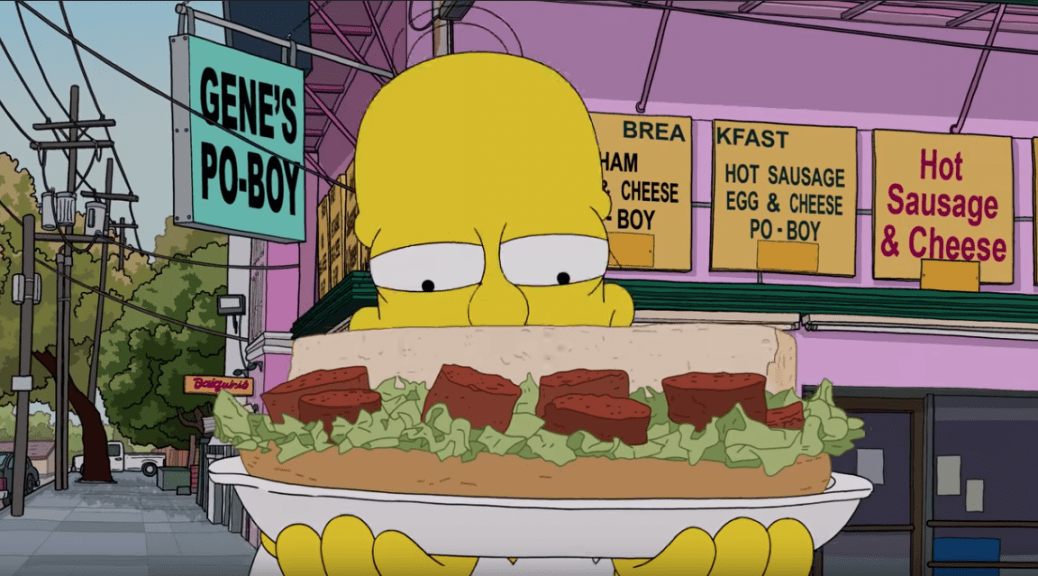 The definitive “how to eat in NOLA” guide has come out, and we have The Simpsons to thank for it. In the episode Lisa Gets the Blues, we are treated to an all out NOLA binge eating extravaganza lead by Homer Simpson. If you want to recreate Homer’s gastrointestinal iron man challenge, you can use the helpful map below, which includes all of the establishments mentioned in the episode and the exact dish Homer enjoyed.

Homer seemed to complete the challenge in less than two minutes, but I recommend a few days or maybe even a week if you’re not a seasoned professional.

If you want a quick walkthrough, start with a hurricane or two at Pat O’Brien’s, and then eat crawfish at Bevi Seafood Co., lamb tagine at Jamilia’s, grilled lamb sausage at Emeril’s, zucchini bisque at Bon Ton Cafe, a crab meat po-boy at Johnny’s Po-boy, a duck po-boy at Crabby Jack’s, a chicken sausage po-boy at Gene’s Po-boy, a crawfish sausage po-boy at Tracey’s, a cochon de lait po-boy at Cochon, a turkey giardiniera po-boy at DeMartino’s, a roast beef po-boy Parasol’s, an alligator po-boy at Jaques-Imo’s, catfish almondine at Mulate’s, crawfish almondine at Mahoney’s, boiled crawfish at Frankie & Johnny’s, Cajun crawfish at Cajun Seafood, fried crab cakes at Galatoire’s, pecan catfish at Parkway Bakery and Tavern, seafood mirliton casserole at K-Paul’s, fried chicken at Dooky Chase, a muffuletta at Central Grocery and Deli, smoky bacon greens at Katie’s, seafood au gratin at Brennan’s, jambalaya at Coop’s Place, Creole sweet potatoes at Antoine’s, pralines and cookies at Loretta’s, oyster pralines at The Praline Connection, oyster patties at Arnaud’s, pecan pie at Palm Court Jazz Cafe, boudin balls at The Court of the Two Sisters, and a bunch of stuff at Commander’s Palace. Of course, make sure to leave room for beignets at Cafe Du Monde.

If you try the Homer Simpson NOLA dining challenge and have a favorite, or if you think Homer missed the best place ever, please leave a comment. 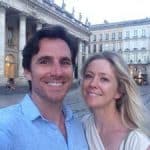 A perfect place to stay! Such a cool good with amazing bars and coffee shops within walk distance. Quiet, clean. A great place to rest and hang. Brett could not have been a better host! Can’t wait to come back.
https://houseoftoxins.com/testimonials/228/ 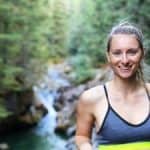 Everything about this home is spectacular! The location was great, the home was cozy and very clean. Brett was incredibly helpful and was so flexibile with our check-in and check-out. He went out of his way to ensure that we had a fantastic stay. I really enjoyed our stay! 10/10 :)
https://houseoftoxins.com/testimonials/261/

The location can’t be beat - in between the French quarter and the Bywater in the heart of the Marigny....

The location can’t be beat - in between the French quarter and the Bywater in the heart of the Marigny. Grocery across the street and one block away from the fantastic St. Roch market for a great breakfasts 2 minute walk. We used to live in New Orleans so we can guarantee that this place has what you want and need for a stay there. The air conditioning worked really, really well which is important during the hot months. The space itself was roomy and private with a back porch and yard for hanging out. I would absolutely go back and do hope it’s available when that happens! We are a family of 3 with a 11 month old baby - we had plenty of space and the house was baby friendly. Also adult friendly - plenty of places to enjoy a cocktail on the property or nearby bars and restaurants.
https://houseoftoxins.com/testimonials/385/ 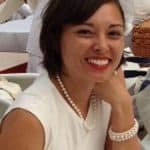 This was a really excellent stay! Brett was really fast and clear with correspondences, the apartment is lovely, spacious, clean,...

This was a really excellent stay! Brett was really fast and clear with correspondences, the apartment is lovely, spacious, clean, and stocked with necessities. We made excellent use of the kitchen, too! Location is ideal--a 10 min walk to Frenchman Street for all your music needs, and walkable to some AMAZING brunch locations. The neighborhood is quiet at night, and neighbors are all courteous. Highly recommend.
https://houseoftoxins.com/testimonials/456/ 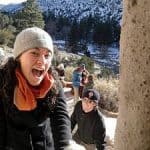 We loved our stay here! It was a beautiful space- the photos don't do it justice. Nice open living area and big backyard. Great, walkable location. Brett and Stephanie were also very responsive to all our questions and needs, both before and during our stay. We would definitely stay here again.
https://houseoftoxins.com/testimonials/230/
5
5